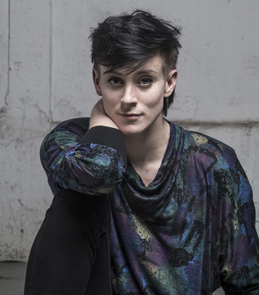 Born in Hamburg, Anna Fingerhuth began her dance education at the Ballettzentrum Hamburg – John Neumeier at the age of seven.

She obtained her A levels in 2004 and began her studies in the dance programme at Palucca Schule Dresden, Hochschule für Tanz, following with further studies of French and Spanish language, culture and literature at the Technical University Dresden.

From 2007 to 2010, she freelanced with artists and choreographers such as Golde Grunske, Julia Nesterova, Marita Matzk, René Rothe and Henriette Pedersen.
In 2009, she was part of the Accademia Nazionale Di Danza’s junior company ‘La Compagnia’ in Rome, where she collaborated with artists such as Ismail Ivo, Robyn Orlin, Jacopo Godani and Wayne McGregor.
During her engagement at Staatstheater Tanz Braunschweig, she had the opportunity to work with choreographers Jan Pusch, Kathrín Hall, Jo Strömgren, Ania Aristarkhova, Antje Pfundner, Roy Assaf and others.

Freelance projects in Braunschweig and elsewhere are including work on the solo E322 / 01 for Christian Weiß, for Ania Aristarkhova’s ‘Obnimashki’ in Berlin and for Cristiana Morganti’s duet ‘A Fury Tale’.

More information about recent work is to be found under upcoming events.

Anna Fingerhuth’s CV in a short, medium and long version can be downloaded as pdf file here.